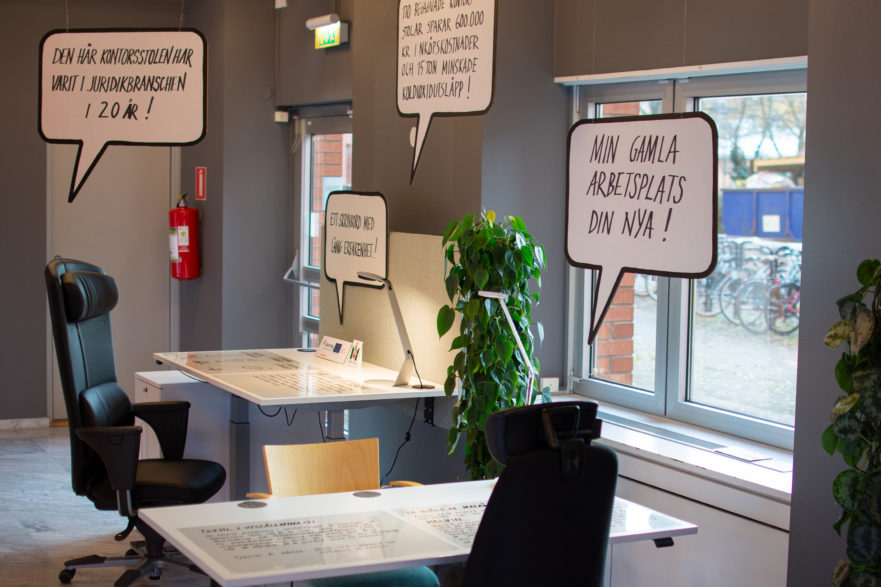 The contract for “non-new” furniture in Malmö came into force in February 2019. Following the launch, the mission of spreading the knowledge and increasing the use of the contract took on. As part of the communication strategy, we chose to set up an exhibition to show the content of the contract in a fun and informative way. Through the exhibition we could show that second hand furniture can be just as comfortable and esthetically pleasing as new ones. We also chose to address the history of these furniture as something valuable and desirable – after all who wouldn’t want to carry out their daily work from a chair with 20 years of experience in the legal profession? Or attend a meeting from a chair that has gathered knowledge from the IT business for 15 years?

An external consultant was hired to produce the text material in an appealing way. From the ceiling hung speech bubbles with short messages such as “Welcome to the future!”, “My old workplace, your new”, “Please, have a seat”, “Don’t be square be circular”. There were also a few bubbles proposing more evidential arguments in favor of the contract, such as “In a 2000 sqm office with 170 employees, you can save SEK 600,000 in purchasing costs and 15 tons of carbon dioxide emissions by using recycled furniture instead of new”. The speech bubbles were made of old cardboard that would otherwise have been thrown away. Transparent sheets were attached to the tables, on which more detailed text about the project and the contract was written. The text on the sheets was not permanent and could therefore be washed away with water after the exhibition, so that the sheets could be used for something else later.

In addition to the contract on non-new furniture with external suppliers, the city of Malmö has some functions within the organization that also focuses on more sustainable options when it comes to interior design. There is a sewing studio and a wood workshop as well as the facilitation service Malvin, mediating furniture already owned by the organization between different departments. The curtains in the exhibition were sewn up by the sewing studio, although they were made in such a way that they could easily be dismantled and used for something else after the exhibition.

This message is only visible to admins.
Problem displaying Facebook posts.
Click to show error
Error: Error validating access token: The session has been invalidated because the user changed their password or Facebook has changed the session for security reasons. Type: OAuthException Subcode: 460

New film about the ICT-pilot

We invite everyone to take a closer look at the pilot action from Denmark, a film has just been made about it.

You can find out more about which cookies we are using or switch them off in settings.

This website uses cookies so that we can provide you with the best user experience possible. Cookie information is stored in your browser and performs functions such as recognising you when you return to our website and helping our team to understand which sections of the website you find most interesting and useful.

Strictly Necessary Cookie should be enabled at all times so that we can save your preferences for cookie settings.

If you disable this cookie, we will not be able to save your preferences. This means that every time you visit this website you will need to enable or disable cookies again.